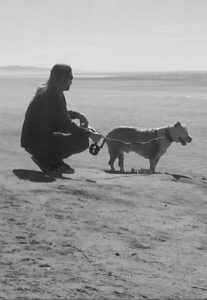 My name is Richard Cooper and all of my life, I’ve had a major love for animals and especially our environment.  I care deeply for our coastline here in North County San Diego and world-wide.  My heart is driven by helping the animals of the sea by keeping it clean and robust.  I’ve also rescued animals of the land like dogs, one in particular named Larry. I’m also a Marine Aquarium Technician and ocean, sea, marine and waterways activist.  As an entrepreneur, I also love tinkering and building things. With Dad in the construction industry, I had plenty of opportunities to swing a hammer.  That desire to build stuff lead me to bigger and better mousetraps. Several years ago, I invented an innovative leash for dogs and alligators (just kidding on the gator leash) and received a patent on the dog leash which I named U-Leash.  My other inventions include a project I was involved in producing a device to clean our oceans.  I was teamed with other innovators in the development of a floating machine that could filter polluted seawater.  The proposed development included a giant four-story tall Gyre skimmer which would be mounted on a large ocean vessel.  Once the vessel has reached it’s strategic destination the Grye is deployed and operational within 6 hours.  At full capacity the Gyre could filter approximately 1 million gallons of polluted seawater per hour.  When the development of this Gyre came to production, I was aced out from being listed on the patent and eventually the project died.  At the time, my inexperience in the “Winner Take All”, turbulent shark tank business environment, gave me a weakness on partnerships and discerning who could make a good partner.  Even to this day, I’m ending my dog leash partnership that’s failing due to a misalignment of truth and values which lead to a lack of integrity of people I’ve learned to dislike.  Time heals and teaches us many things about our heart.

Today, what’s most important to me is my oceanic research concerning the continued pollution of our oceans, seas and waterways.  I’m currently working on a new, more efficient gyre ocean skimmer that utilizes 21stcentury nanotechnology to trap tiny, microscopic plastic particles and collects them and prepares them for recycling revenues.  It’s like going fishing, but not for fish… for plastic.  So, rather than be on my own fighting the good fight, I’ve partnered my ideas about our environment and cleaning the oceans with a North County nonprofit, 1ARC. About two years ago, I saw this guy picking up trash on the cliffs of North Ponto at South Carlsbad State Beach. I watched him for a few days doing the same thing except this time he was planting some seedlings on the coastline cliffs.  I walked up and started a conversation about life and our planet.  I found out that his name was Al Sanchez and that he had a website called 1ARC.org.  Al took a liking to my dog Larry and showed that he also had a big heart, like me, when it comes to helping people and our environment.  Like attract like as they say and now I’m willing to get behind a guy like that because he has the same passion as I  do when it comes to saving Mother Earth and her natural resources. After careful consideration, I’m merging my environmental efforts, 1 Peace @ A Time (see Mission Statement below), with 1ARC (ALECTRONICS Research Center International) to create a stronger and greater force for good.  As stewards of Mother Earth, it’s extremely important that we recognize our obligation to maintain all of our majestic waters on this precious planet.  1 Peace @ A Time and all of it’s followers are willing to assist 1ARC with the implementation of  a new innovate communications network linking volunteers anywhere in the world with the system to assist them on any trash/recycling project. By coming together, we are capable of removing millions of pounds of trash (plastic, glass and paper) annually from our Land and Seas.  Please contact me at:  richard@1arc.org   for further info.

In conclusion, I would like to share an incident that happened to me last summer at the beach when me and my dog Larry were walking like we always did.  One early Sunday morning, I saw a baby elephant seal in trouble just south of South Carlsbad State Beach.  He was helpless and defenseless and I needed to do something. In a fury, I wasn’t sure what to do so I called 1ARCs Founder, Al Sanchez.  At the time, I was pissed and frantic which was affecting Larry. Ignorant people were walking right up to the helpless seal pup which was practically deceased and barely breathing, poking and prodding it constantly.  I was yelling and screaming to those looky lous on the shore, “THAT’S A BABY ELEPHANT SEAL.  GET BACK! STAY AWAY NOW!”  I was so upset that people did not respect the life of an animal needing help which made me more angry.  I kept shouting out repeatedly until Al told me to cool it and to leave them alone.  Well, some people listened and others really didn’t care.  After a brief discussion, we agreed that I should call the Sea World rescue team before the pup dies. I explained my story about protecting a washed up elephant seal pup here at South Carlsbad State Beach and evidently I was convincing enough that they sent a rescue team.  While we waited for Sea World, Al calmed me down a little more and he waited on the highway with Larry and I went down the cliff to the beach to see if the pup was still alive and to make others aware that they needed to leave the immediate area and could not stick around.  (It’s important to note, even though the Elephant Seal is not on the endangered species list, by international law, it still requires a quarantine area of a Fifty (50) foot radius around the injured/deceased animal. The reason for the strict quarantine procedures are due to the unique nature of the elephant seal.  If it had died, there’s a human pathogen that could infect humans.  For the very reason. the strict quarantine procedure exist.  Even our local lifeguards were not aware of the unusual quarantine requirements.)  Finally, about an hour later, the Sea World rescue truck arrived and I’ll never forget when we began to lift her onto the circular, mini trampoline gurney, her eyes came to life and she began to smile knowing that she was now in good hands. She was wiggling a little and ready to go to her new temporary home to be cared for.  A month later, I called Sea World to see how she was doing.  “She’s doing well Richie!  You should see her.  We’ve named her CINCO because she was our Fifth successful rescue of the year.  Thanks to you guys, she made it!  We’re so appreciative of your efforts and wish you continued success with all of your endeavors. ”  I felt pretty good after knowing that she made it.  Several months later I called again to find out that she made a full recovery and was released back into the vast ocean, hopefully to reunite with her family once again.

That’s me in a clamshell. If you care for our environment, maybe we’ll meet soon! Thank you.